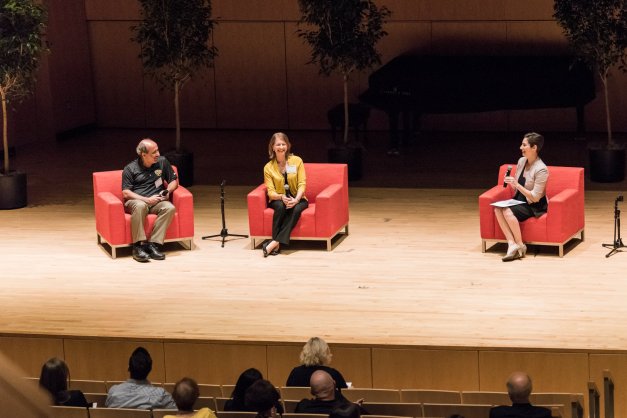 L to R: Vanderlei Martins, Christine Mallinson, and Dinah Winnick. Panel session on communicating about research to the media, as part of the “From Advancement Office to Advancement Community” plenary session at the 2018 UMBC university retreat.  Photo credit: Marlayna Demond for UMBC.

July, 2021 “A Magical Realm of Crabs and Chickens”

In this article for Outside magazine, I discuss the sociolinguistic history of the Delmarva peninsula.

In this article for the Washington Post, I weigh in on the FAA’s new recommendations to adopt gender-neutral language, such as ‘uncrewed’ for ‘unmanned’ and ‘human-made’ for ‘man-made’.

In this article for National Geographic, I weigh in on how kids get creative with language and how this is good for learning and social development.

In this article in Curious Kids, a series in The Conversation in which academic experts answer real questions from real kids, I explain why accents exist and how they tell us something about who we are.

In this article in Quartz, I explain feminist reactions to ‘you guys’ and give my take on the cultural and linguistic promise of the word y’all, as well as potential challenges to its widespread adoption.

This article in the UMBC News talks about my appointment as inaugural director of UMBC’s Center for Social Science Scholarship, and how the new center will promote and support research by faculty and students across the social sciences.

This press release covers my study of K-12 STEM educators with Anne H. Charity Hudley (University of California, Santa Barbara), which demonstrates how adding linguistic information into classroom teaching can help remove barriers to STEM achievement for African-American students. Published in the September 2018 issue of the scholarly journal Language, a pre-print copy of the paper is available here.

I am honored to be featured as the linguist of the month for the Linguistic Society of America‘s August 2018 member spotlight. “Being open to insights from outside our discipline can give us important historical, cultural, and social knowledge that is necessary for putting information about language into broader social and cultural context,” says Christine Mallinson, this month’s featured LSA member.

July, 2018 “9 Things People Think Are Fine to Say at Work — But Are Actually Racist, Sexist, or Offensive”

I was interviewed for this article in Business Insider about the language of microaggressions, including some common phrases that can be used to transmit everyday slights and unconscious biases in the workplace. The piece received additional coverage in Business Insider (2020), Reader’s Digest (2020), and Marie Claire (2021).

When a Maryland expat moves to Montana, he takes his accent with him! This article for the Atlantic considers the issue of how former Baltimore/Queen Anne’s resident and current Montana Republican U.S. Senate contender Matt Rosendale pronounces the name of his adopted home state.

This UMBC News article reviews describes the recent “GRIT-X” micro-talks by faculty and alumni, including my talk, “The Social Life of Speech.” I talk about how demonstrating the value of diverse linguistic patterns in the classroom shows students they are valued, which increases their belonging and engagement.

I’m so honored to be profiled as part of the “Coffee with Parents” series on Baltimore’s (cool) progeny blog! What could be better than talking about kids AND work?  In the article, I talk about my own family history and my research on linguistic diversity, in education and in Baltimore.

This UMBC News article, “UMBC researchers address diverse factors impacting U.S. schooling,” describes recent press coverage of myself and two other UMBC faculty for our research on “factors that shape K–12 education in the United States”, including my article for The Conversation about how language differences among students can affect student outcomes.

Why is it important to learn about and study language? In this short podcast, “The Revelatory Power of Language,” which I produced for the Maryland Humanities Council’s “Humanities Connection” series, I talk about how language differences occur naturally and are part of how we define ourselves, individually as well as socially.

Teachers’ words matter, and students’ do too – from science to the humanities. Anne and I are excited to have our work with educators featured in this article, “The Sound of Inclusion”, that we wrote for The Conversation. There are so many amazing teachers and students who are the inspiration for this article and for all our work — we are so grateful to you all!  In August 2017, our article was reprinted in Salon and in Newsweek.

I am honored to be a part of this Baltimore Sun multimedia feature story on Baltimore language change. The feature includes the news article as well as a short video in which I weigh in on language variation in the city, plus an interactive lexicon.

I was interviewed by Talk the Talk as part of their podcast about linguistic activism. I talk about Dr. Anne H. Charity Hudley‘s and my free iPhone app for teachers, “Valuable Voices” — my interview runs from 20:35 to 29:20, or just listen to the whole excellent podcast!

This UMBC News story describes how Dr. Anne Charity Hudley‘s and my free iPhone app for teachers, “Valuable Voices,” is reaching teachers far outside our own networks. If you haven’t already, go to the App store, search “Valuable Voices,” and download, or click here for the link.  And if you are a teacher and are interested in participating in our follow up study later this year, send me an email!

A feature story in the UMBC News profiles “Voices of UMBC,” a short film produced by my students to highlights linguistic diversity on our campus. The students created the film for their final project in my graduate seminar, “Language in Diverse Schools and Communities.”

In the October issue of Glamour magazine, I was interviewed on the common use of ‘crazy’ to dismiss and marginalize women’s perspectives and concerns.

In this article in Delmarva Now, I talk about how language changes, and I explain some of the geographic and social influences on the dialect of the Eastern Shore of Maryland.

In this April 2013 interview on National Public Radio’s All Things Considered and hosted on the NPR Code Switch Blog, I talk about Baltimore adolescents’ use of ‘yo’ as a gender-neutral 3rd person singular pronoun–an unusual and interesting linguistic innovation in American English.

This story in the newsletter from the Middle Grades Partnership reports on how participants in my and Anne Charity Hudley’s week-long language variation professional development workshop for Baltimore middle school teachers. One teacher called MGP’s 2011 language variation workshop “an eye-opening” revelation and said she “applied everything immediately.” Another reports that the workshop gave him “a whole new vocabulary with which to talk about language.” You can read the article here.

This story in the Fall 2011 issue of the UMBC Magazine talks about the podcasts on Baltimore language and culture produced by students and me in my Spring 2011 seminar, “Language in Diverse Schools and Communities” and includes a picture of me working with local public and independent K-12 educators.

September 16, 2011 “Tweets about Rape a Cause for Concern” in Patch

In this interview in Patch I talk about the use of the word “rape” in sports metaphors.  Check out the article here.

From John McIntyre’s You Don’t Say column in The Baltimore Sun: “Item: Professor Christine Mallinson of the University of Maryland, Baltimore County has had her graduate students examining language variations in Baltimore. These students have produced podcasts on accent features among African-Americans, multiculturalism and ethnicity, and hon as a linguistic and identity marker. The hon podcast in particular, being academic and dispassionate, should be a welcome change from the recent shouting over the word.”

This UMBC press release announces our new three-year grant, “Assessing the Results of Sociolinguistic Engagement with K-12 STEM Education in Maryland and Virginia Public and Independent Schools,” in which we will work with K-12 STEM educators in the Baltimore and Richmond areas to collect data on how these educators learn from professional development workshops on language variation and integrate pedagogy and assessment techniques into their classroom.

In this interview on WAMU 88.5 American University Radio I talk about the Tidewater Accent on Tangier Island, Virginia, which is also characteristic of the eastern shores of Maryland and Virginia and of the Outer Banks of North Carolina.  Check out the story here.

Our book was profiled in an article on Vocabulogic — a site for educators that focuses on “linguistic insight and word knowledge.”  The article is called “Dialect, Slang, Jargon, Register: Implications for Instruction,” which are topics that we definitely discuss at length in our book.

January 18, 20, and 25, 2011 “Making Sense of Language Variation in the Classroom” Interview and Book Excerpt

Our work and our book are featured in the “Teachers at Work” column on the Visual Thesaurus.  Part 1 of the interview explains how our book came together and why we do what we do.  An excerpt from our book called “Dameon’s Rap” discusses how to use rap and hip-hop for creative vocabulary learning.  Part 2 of the interview describes our current work with educators and students and our plans to create more resources for teachers to use in class.

In an essay called “Why I Do What I Do,” Dr. Lauren Hall-Lew mentions our book as an example of sociolinguists who make academic research immediately practical by bringing insights directly to classroom teachers.

Dr. Jason Loviglio interviews me about our book, how it fits into my research and outreach at UMBC and with educators in Baltimore, and why I do what I do as a linguist and sociologist.

In this short article and three-minute video clip, I explain how, in educational settings, the language that students bring with them to school can significantly affect how they perform academically.

In this post on Word. The Online Journal on African American English, Dr. Renee Blake and Cara Shousterman, both of the New York University Linguistics Department, highlight on our work with educators as helping bridge what is too often a divide between what goes on in the academy and what happens in the “real” world.

I was interviewed about English language variation for Studio Classroom, the second most popular English-teaching magazine in Taiwan.  The magazine provides practical, interesting articles to help readers improve their English skills.